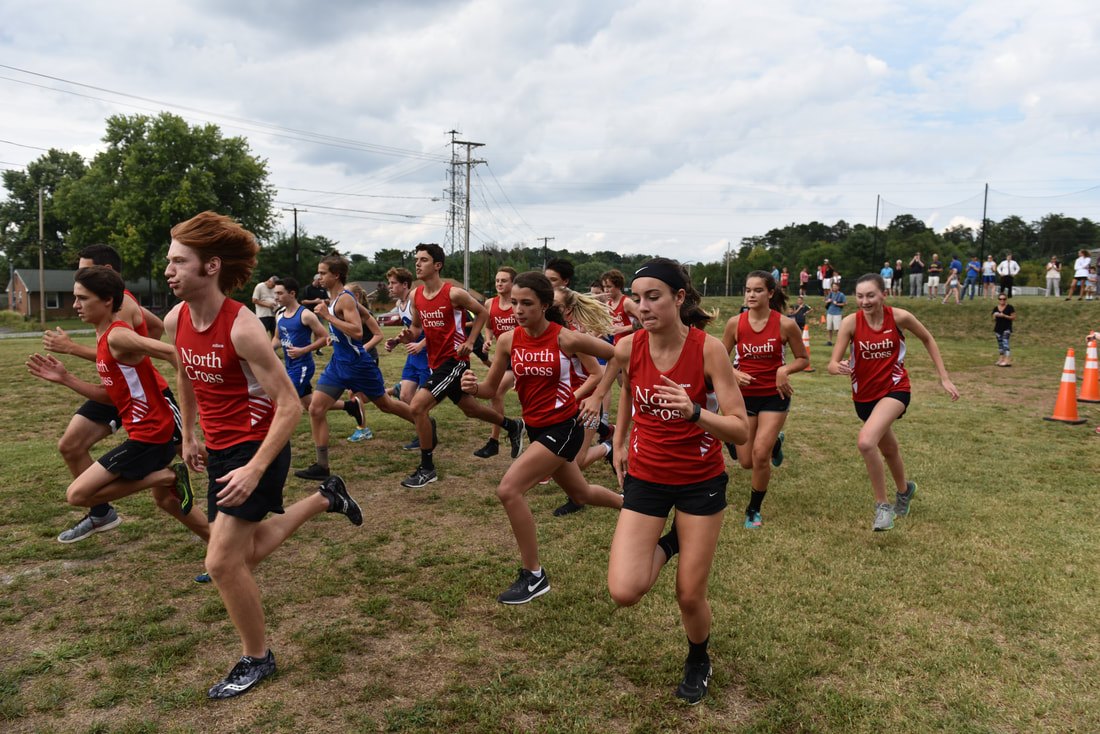 The sport of cross country has always been very popular at North Cross School, and the mountains of Roanoke offer a beautiful backdrop for distance running. During the season, the boys’ and girls’ teams normally compete in six to eight dual meets as well as two or three large invitational meets including Knights Crossing at Green Hill Park. We compete in the VIC championship as well as the state independent school championship at Fork Union Military Academy. All of our varsity competitions take place on a 5K course, but there are also “developmental” races for younger runners which take place on shorter 1.5–2 mile courses.

The teams train both on campus and in several local venues including Fishburn Park, Washington Park, and on trails along the Blue Ridge Parkway. The hilly terrain in the Roanoke Valley makes for a great variety of training, and the North Cross home course is particularly challenging with its famous “Middle School Hill” coming just after the two mile mark. 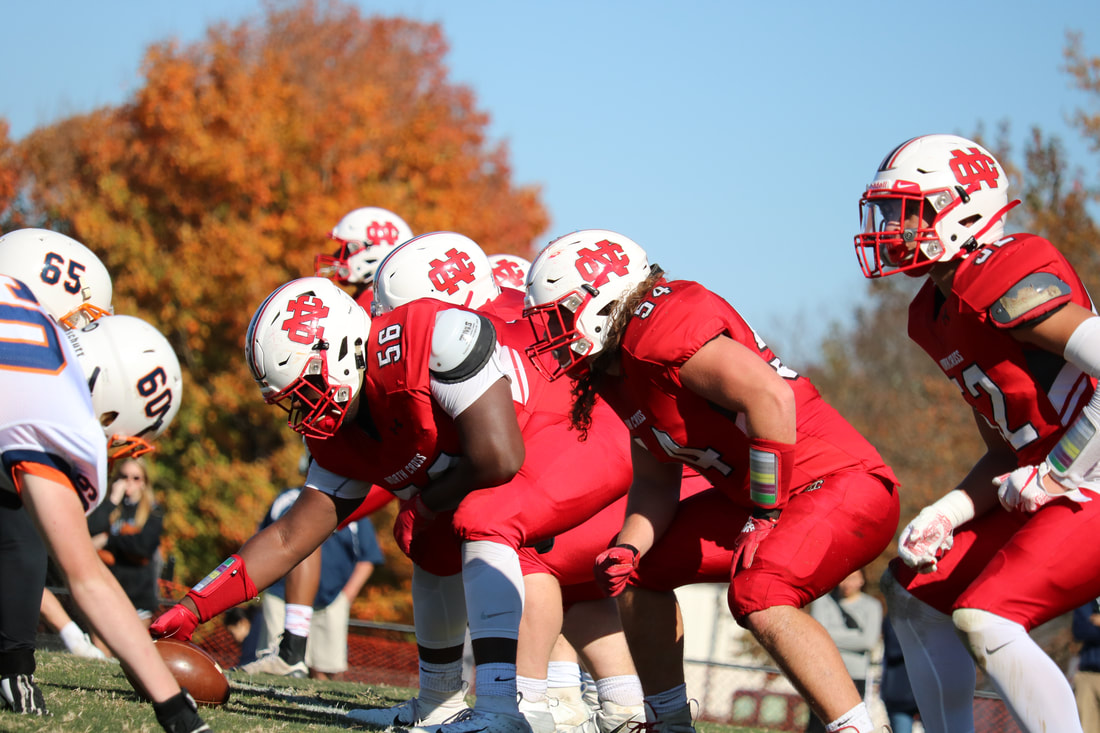 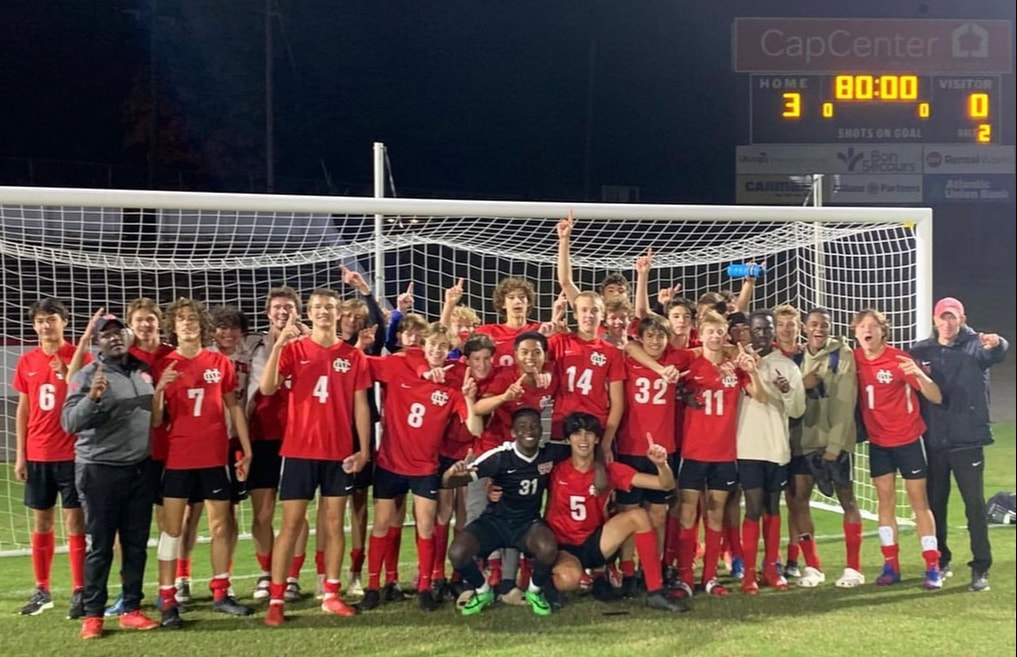 The North Cross men’s soccer program was organized under the direction of Richard Cook in 1972.  In his 36 years as the varsity coach, Cook compiled a 449-112-48 record, winning 18 Virginia Independent Conference championships and the 2007 VISAA state championship.

Current varsity coach James Brown joined Coach Cook’s staff as an assistant in the spring of 2005. Brown, a former player at Roanoke College, assumed the head coaching responsibilities in the fall of 2008. Brown also assisted both the men’s and women’s programs for the Maroons before coming to teach and coach at North Cross. He led the Boys Varsity team to their 2018 VISAA State Championship, defeating Carlisle School 2-1.

North Cross has a rich soccer tradition in the Roanoke Valley. Players are encouraged to play as much as possible and to attend camps around the state and country.  Several team members have been recognized by the Roanoke Times as “Timesland Players of the Year” and additionally to the “All-Timesland Team.”  The soccer program also boasts a record number of players who have played at the collegiate and professional levels after high school.

Practices emphasize passing and smart play, like good positioning and being vocal on the field. Respect for teammates, the coach, and officials will be stressed. Complaining, disrespect, lack of encouragement to others or failing to have a sense of humor about mistakes will not be tolerated. Hard work and pushing one's self on the field will be encouraged and praised.
SCHEDULE
Girls field hockey 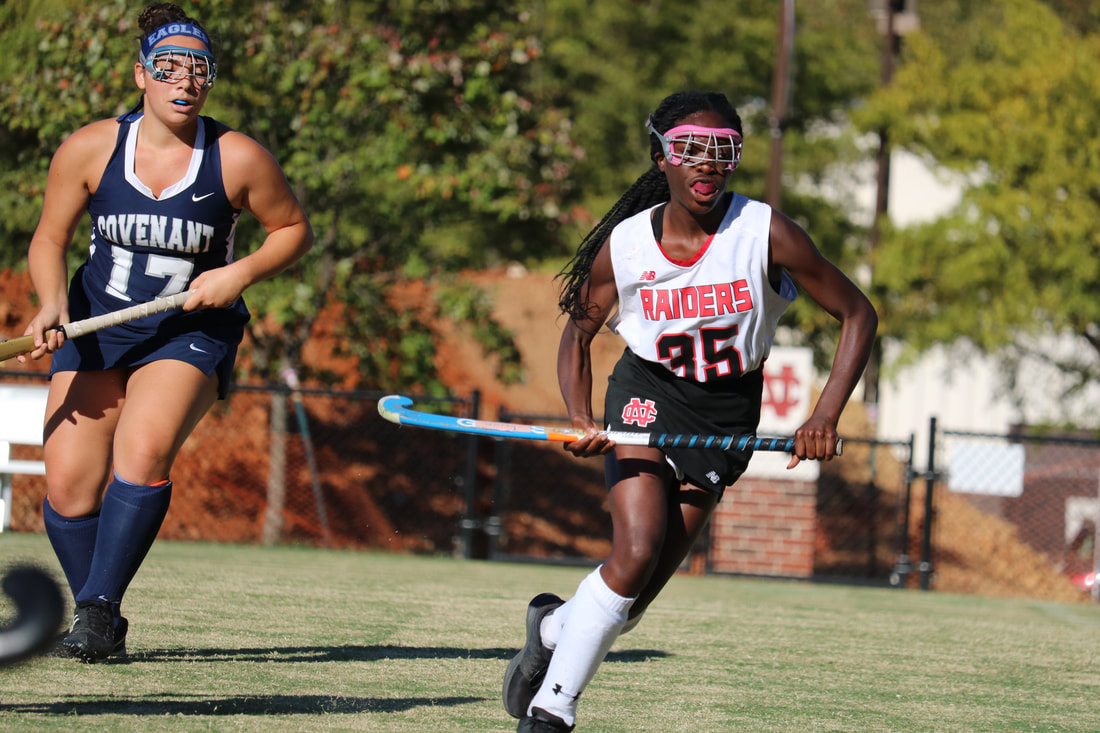 BRC Conference Championships: 1991, 1992, 1993, 1994, 1996, 1997, 2012, 2014
​
North Cross School is the only secondary school in the Roanoke Valley to offer field hockey to its Upper School girls. The program consists of a varsity and a junior varsity team who compete in the Blue Ridge Conference. The varsity season concludes with a conference tournament which North Cross has won eight times. Additionally the teams travel to Richmond, Charlottesville, and cities in North Carolina competing against state-ranked opponents. Regardless of the challenging schedule, the athletes focus on developing hockey skills and playing together as a team. They are encouraged to attend summer camps and to play in the Virginia Commonwealth Games. 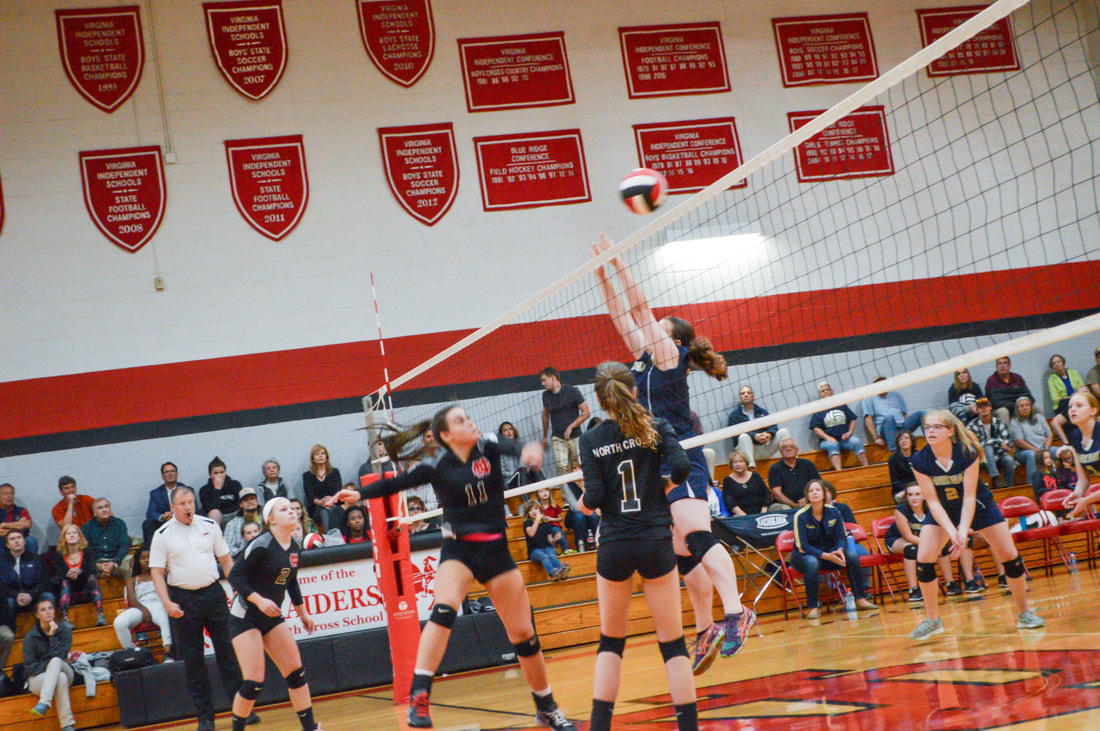 Traditionally the teams are not as tall as the competition and take pride in being very tenacious, defensive teams. Passing and serving skills are stressed at all levels of competition. Focus is on “team play” and developing the ability to play as a unit. Players are encouraged to attend volleyball camps offered during the summer on the North Cross School campus or elsewhere.

Ten schools in the Blue Ridge Conference offer multiple levels of volleyball. In addition to competition with the BRC schools, the junior varsity and varsity teams compete against several local public schools. The varsity team participates in the North Cross School Invitational tournament each fall which includes, in addition to North Cross, seven independent schools from all over the Commonwealth of Virginia. 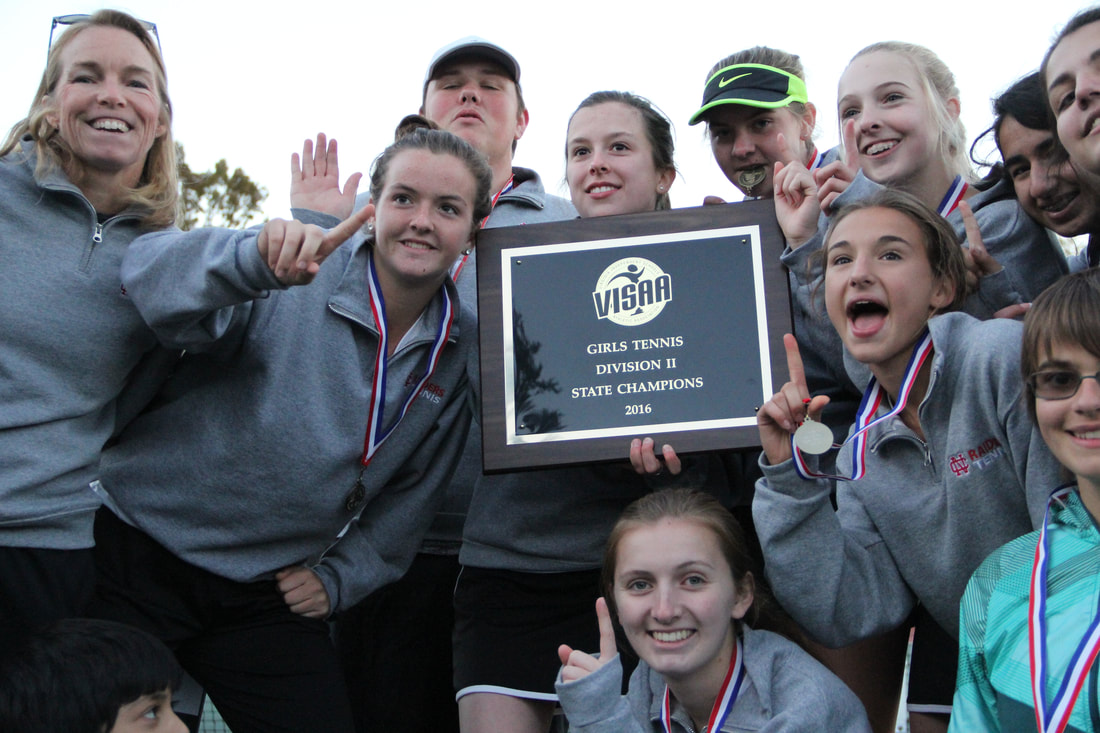 The North Cross School Girls Varsity Tennis team plays in the Fall as does the Co-Ed Middle School Tennis Team. The Varsity team consistently wins the Blue Ridge Conference and were VISAA State Champions in 2016 and 2017. They play conference and non-conference matches throughout the season. Some of the non-conference matches include local public schools and private schools who play their season in the fall. Co-ed Middle School Tennis is available for students in grades six though eight. The team plays in the Roanoke Valley Tennis Association's City Middle School Tennis League and have been league champions two years running. 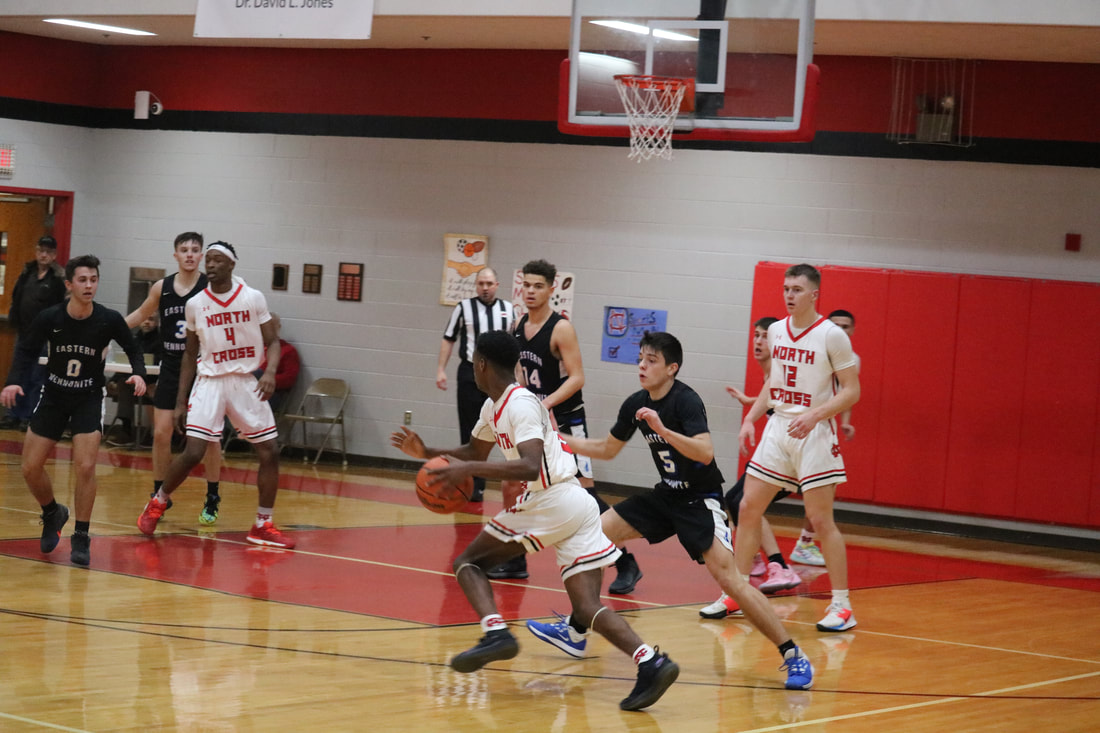 North Cross School has four levels of boys basketball and two of girls. Coaches at each level are committed to teaching the players the importance of working hard to improve their individual skills, and all players are given the opportunity to play, regardless of their specific level of talent. Sportsmanship is also emphasized as an integral part of being on the team. 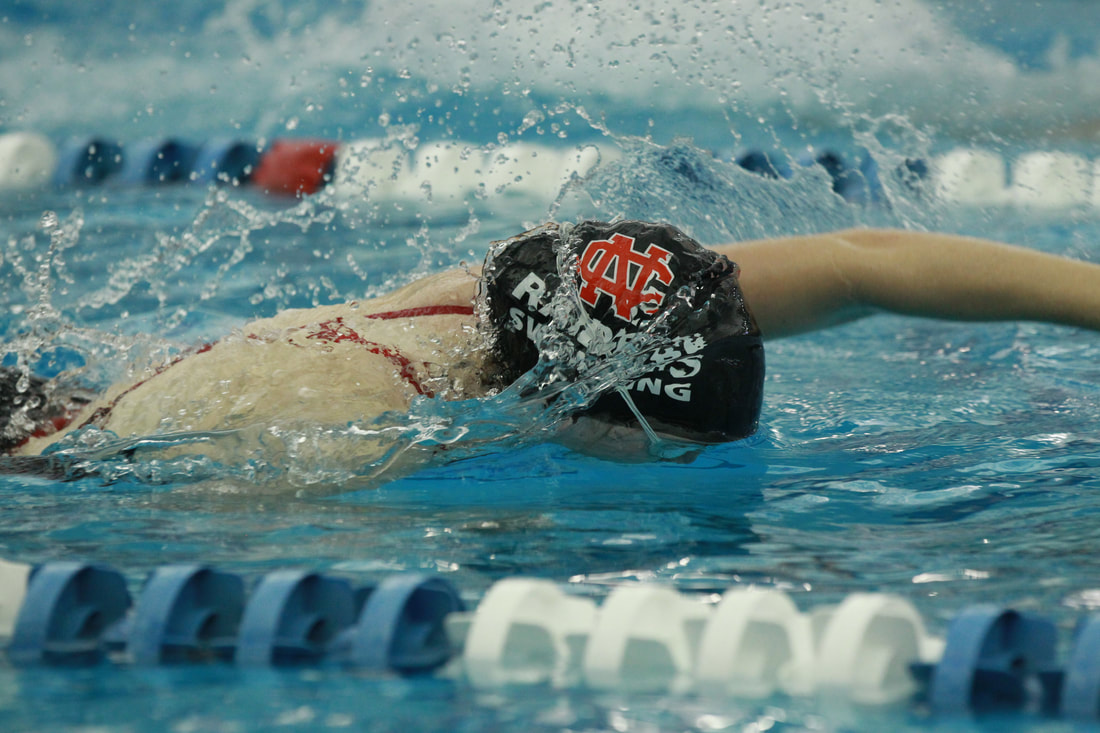 The Varsity Swim Team at North Cross has enjoyed unparalleled success winning 12 VIC Championships and eight BRC Championships; the last two years the boys were the VISAA State Championship DII Runners Up, and the Girls were the 2018 BRC Champions. Many of the teams' swimmers have gone on to place in competitions at the state level—swimmers have accumulated more than 20 state titles. The team trains and competes at the Carter Athletic Center (CAC), on the North Cross School campus, in a six-lane 25-yard championship caliber swimming facility. The CAC hosts several swim meets each season against both schools in our conferences and the top public schools in the Roanoke Valley. Swimming also has a Middle School team who competes.

The North Cross Raiders compete in their home meets on campus in ​the pool in the Carter Athletic Center.
SWIM SCHEDULE
INDOOR TRACK 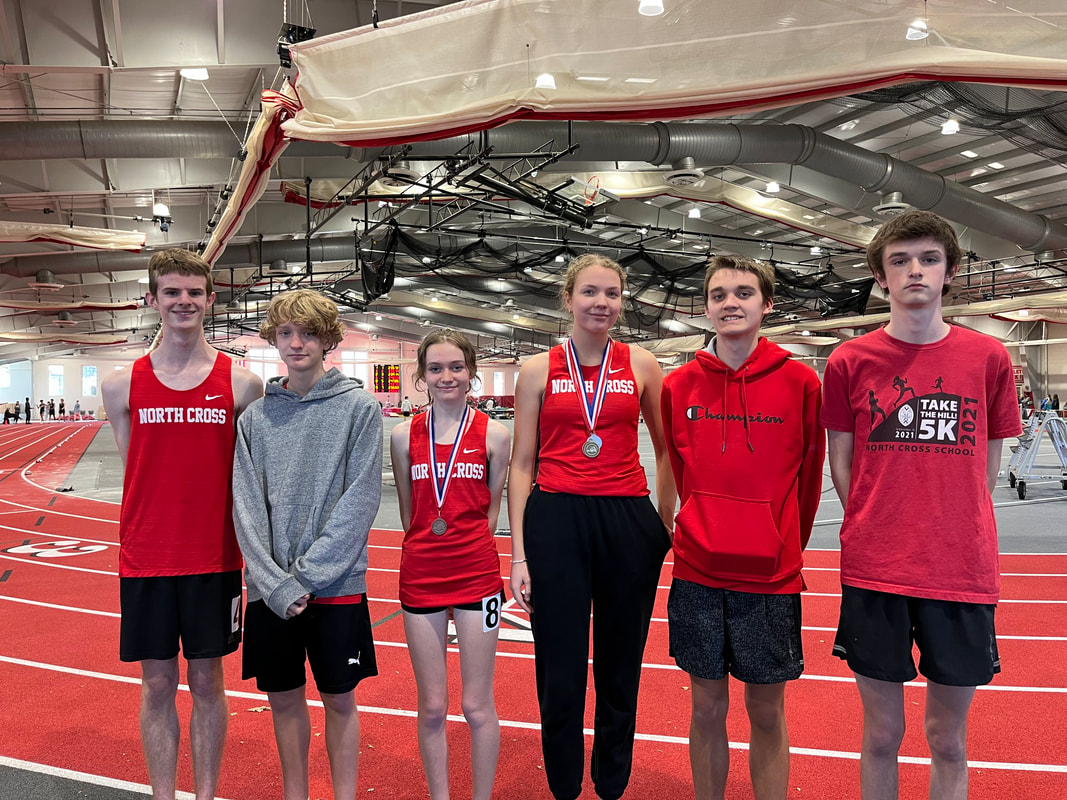 ​Edward Dickenson, Head Coach
Lauren Horner, Shannon Taylor, and Brett Jones '16,  Assistant Coaches
​
For the first time in 2021-22, and without a formal indoor track to practice on, the North Cross running program began ANOTHER new chapter in their storied history. The team practices daily on campus during the week and competes in area indoor track meets quite often and against quality teams to hone their skills, refine their strategies and increase their endurance. Their unique training method doesn't hinder their success.  In their first Winter season, six athletes qualified for States, two athletes medaled and were All-State and Flavia Daniels '23 was State Champion in the High Jump!  The program has already exploded with popularity, participation, and talent...while the first season (2021-22) had only eight athletes on the team, the second official season (2022-23) grew to an astounding 45 athletes ready to compete!!
INDOOR TRACK SCHEDULE
ICE HOCKEY 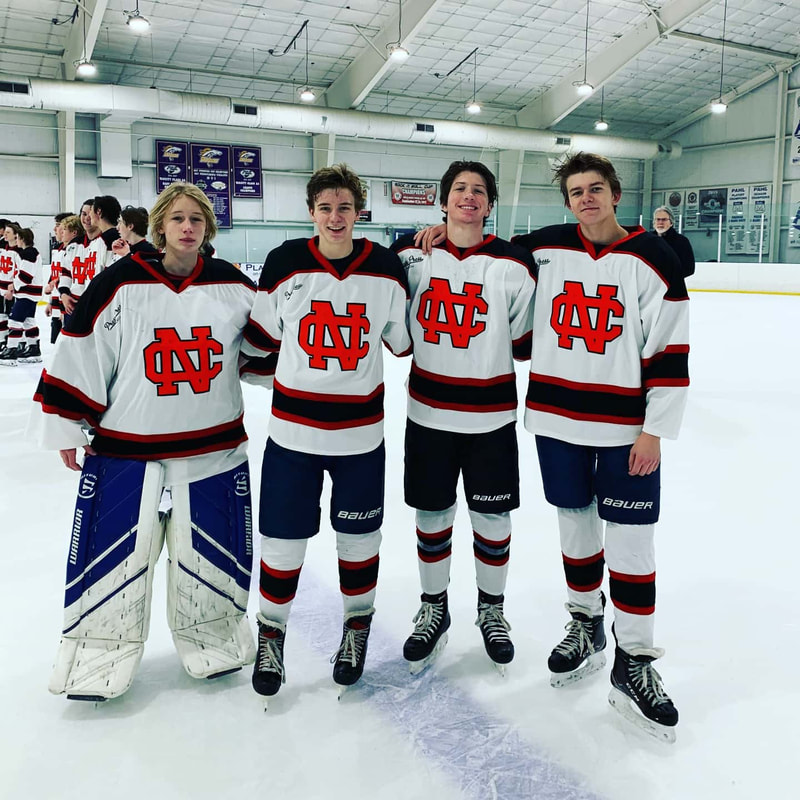 The Ice Hockey program began in the Winter of 2019-20.  Students can either enjoy perfecting their skating skills or compete on the  Club Team which features not only players from North Cross School, but also  students from other schools who come together each winter for tournaments under the NC Raiders brand.  The Ice Hockey Program is offered to male and female North Cross students in grades 9-12.

Learn-to-Skate
A feeder program for North Cross Lower School students who would like to learn how to ice skate. 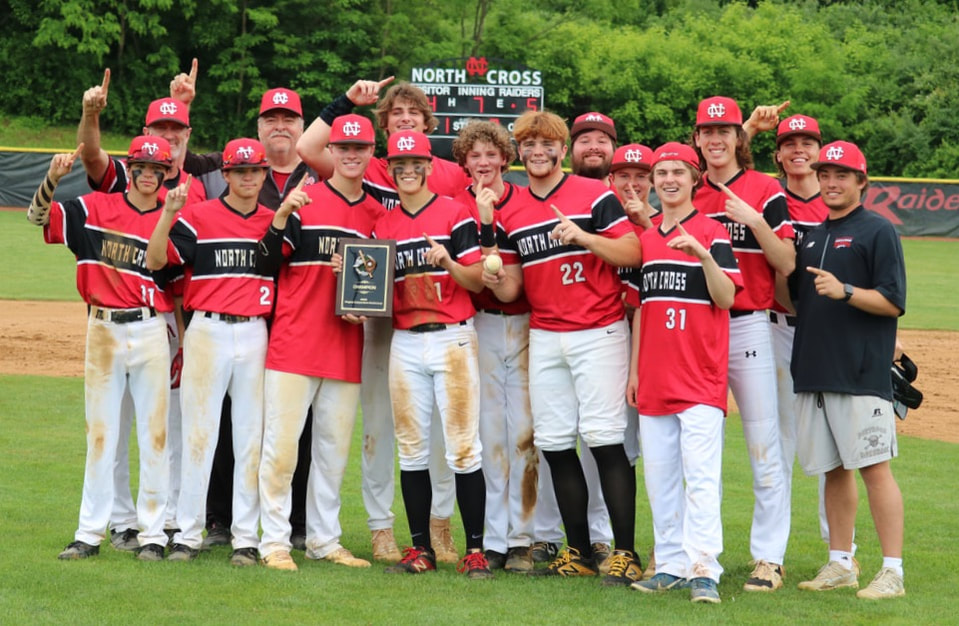 The Baseball program is dedicated to providing the student/athlete at North Cross School an opportunity for personal growth in a team atmosphere. The team competes as a consistent force among the twelve teams in the Virginia Independent Conference. The baseball program promotes a strong competitive spirit in a positive team environment. Players are drilled in the fundamentals of the game in order to achieve the highest level of high school play. The coaching staff stresses the value of developing quality individuals where strong character, honoring all aspects of the game, and maximum effort are the constant goals.

Coach Eric Lawrence has been coaching since 1989. As head coach of the Raiders he has maintained a winning percentage of .700 in the Virginia Independent Conference.

Dave Dickerson has been coaching since 2001 (a former second baseman at King College) and is the father of former North Cross baseball standout, Wes Dickerson '05.

Scott Smith was an All-American player at Allegheny College, and a college coach for 10 years at the University of Rochester, California University, and Carnegie Mellon University before moving to Roanoke. He has coached at North Cross since 2013, is the father of former North Cross baseball captain Tanner Smith ’16, and was inducted into the Roanoke-Salem Baseball Hall of Fame in 2018.

Tanner Smith ’16, is in his second year coaching at his alma mater, and was a two-year captain and VIC all conference player as a pitcher and first baseman. He is a graduate of Washington and Lee University and currently a graduate student at the College of William & Mary as well as a national columnist for BaseballHQ, a division of USA Today Sports. 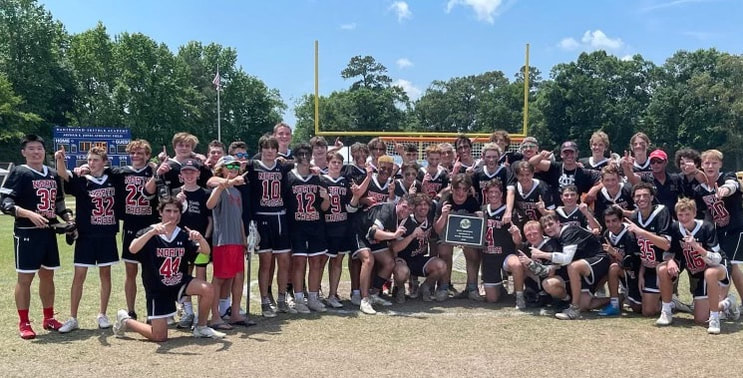 ​The Boys Lacrosse teams at North Cross play in the spring and have both a Middle and Upper School team. The Varsity team holds the title for the Division 2 VISAA State Champions. The team also competes in the VIC Conference. 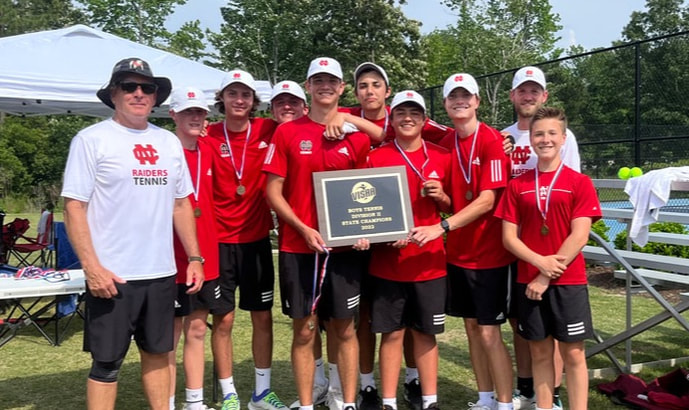 The North Cross Boys Tennis Team has a rich tradition—having won numerous Virginia Independent Conference (VIC) Championships, including a run of four straight from 2000-2003 and most recently state champions two years running in 2015 and 2016. The program is offered to students in grades eight through 12.
​
The North Cross Raiders play their home matches on campus at Fishwick Tennis Center.
Boys Varsity Tennis Schedule
Girls lacrosse 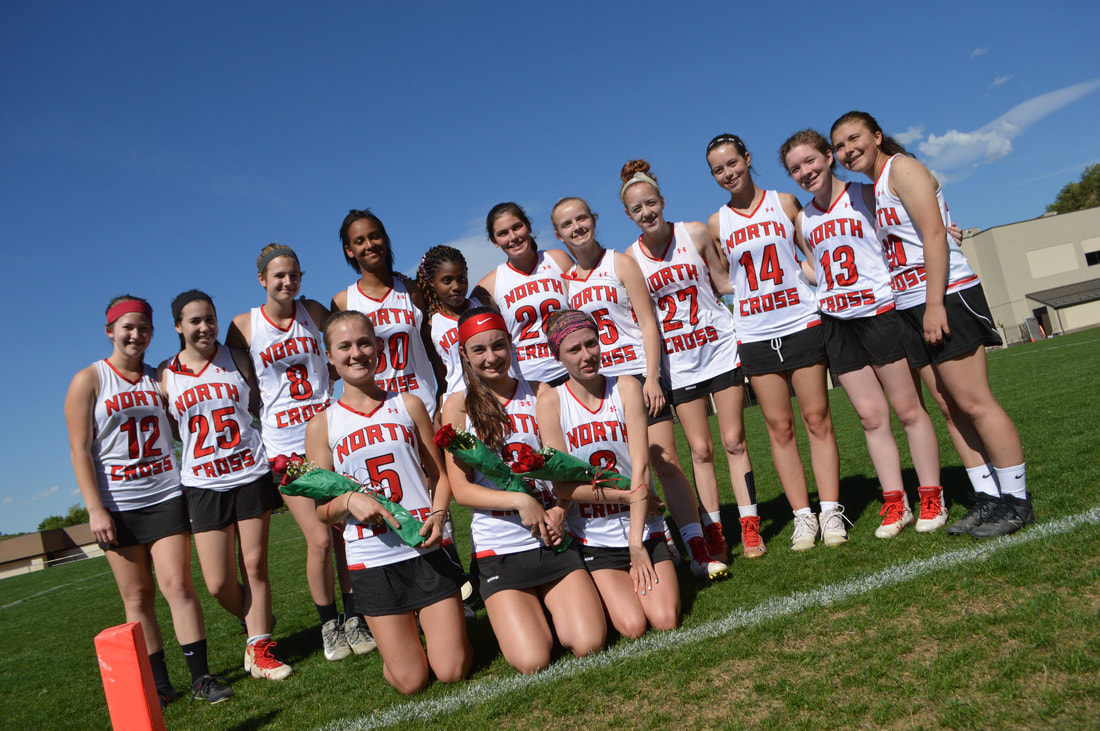 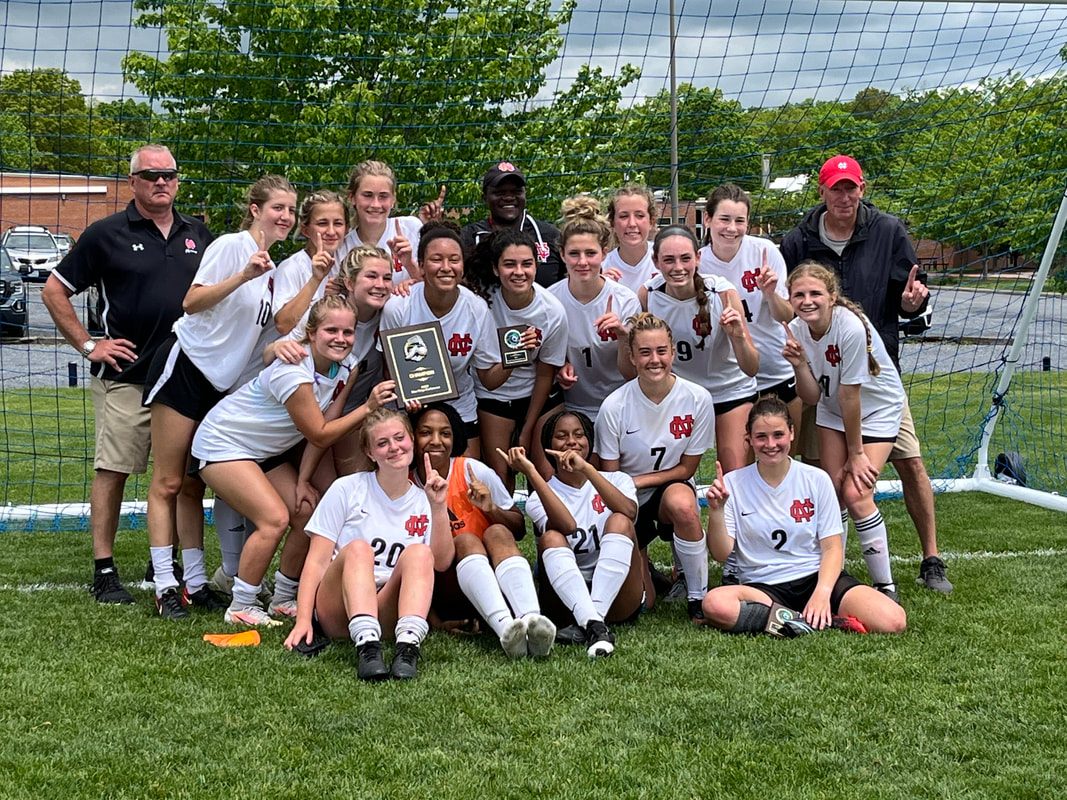 North Cross School was one of the first four schools in the Roanoke Valley to play girls varsity soccer, and over the years has seen the popularity of soccer explode. The girls play in the Blue Ridge Conference which consists of 12 teams. Several public schools are also included in the schedule. The team was established in 1990 and since then, the team has won nine conference championships.

The North Cross School girls middle school soccer team works closely with the varsity team, focusing on improving soccer skills and teamwork. All students with an interest in soccer are welcomed into the program, regardless of athletic experience or background.

The North Cross Raiders play their home games on campus on Cook Field. 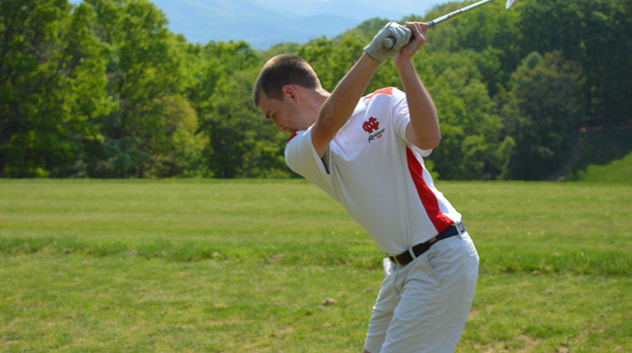 The North Cross School golf program aims to allow male and female students to learn and further their golf skills/game in a non-competitive environment.  Students, regardless of ability level, are welcome to join the team. In the match play component of our season, the best golfers will qualify to compete against other teams. The program aims to introduce the game to students so they may enjoy the sport for a lifetime.
Varsity Golf Schedule
TRACK & FIELD 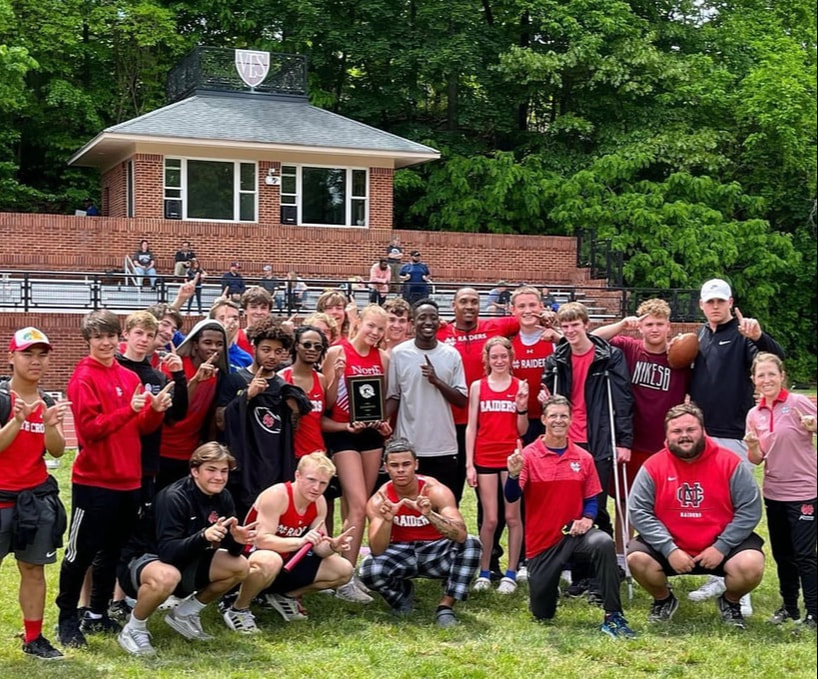 Edward Dickenson, Head Coach
Lauren Horner, Shannon Taylor, Brett Jones '16,  Louis Booker, Assistant Coaches
​
For the first time in 2018, and without a formal track to practice on, the North Cross running program began a new chapter in their storied history. The team practices daily on campus during the week and competes against area track teams with scheduled weekend practices on tracks to refine their skills and strategy. Their unorthodox method doesn't hinder their success. This past spring, senior Euan Spikers '19 made First Team All-Conference at the VIC finals, and Second Team All-State for his hurdling abilities (fun fact, he came here from Australia as a football player). Watch a video from Coach Dickenson on why track, why now?